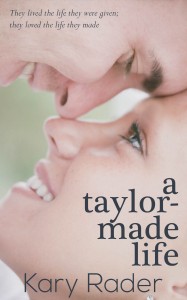 Thank you, GraveTells for hosting an event for quality Indie Authors!

I am giving away 10 ARC in PDF format of my upcoming release, A Taylor-Made Life. Congratulations to the following winners of those!

Cheerleader Taylor Smith doesn’t want to die a virgin. Unfortunately, if the terminally-ill leukemia patient doesn’t find a lover or a stem-cell match within months, her fear will become reality. But when her cancer mentor is revealed to be a hottie entrepreneur from California, it seems fate might finally be on her side.

Tech-geek Gavin Taylor has everything he ever wanted, except someone to grieve for him when he’s gone. With his melanoma cancer beyond the help of his riches, he agrees to participate in a cancer patient mentoring program where he’s matched with a dying teen from Texas. Despite his immediate attraction, the Silicon Valley whiz intends only to provide friendship and happy memories to the beautiful, young woman who is determined to win his love.

When it’s discovered that his frozen sperm and her harvested eggs could lead to a cure, Taylor’s mother offers to be a surrogate. And Gavin must decide if he can risk the heart he has never given and a child he’ll never know to a girl he just met.

He lay in his bed in the Smiths’ guest room. The full moon peeked through the mini-blinds and cast slatted shadows over the bed. He’d tossed and turned for the last two hours even though his body should’ve been exhausted. He’d tried breathing exercises, stretches, a small snack he’d snuck down to the kitchen for. But nothing worked.

The door of his room creaked open, Taylor’s pajama-clad form silhouetted in the frame.

“Are you awake?” she whispered.

“Yeah. Are you?” he whispered back.

She snickered quietly and closed the door. “No. I’m sleepwalking.”

“Shh. You’ll wake the neighbors.” The edge of the bed gave as she sat.

Staring at her, he was barely able to make out her face in the dark. Lines of moonlight fell across her body. “What couldn’t wait until morning?”

She wrung her hands in her lap. “I couldn’t sleep.”

“And you thought I could help or keep you company?”

The shadows of her shoulders moved in a shrug. “I don’t know. I keep thinking…I can’t get Rachel out of my head. You know, I told her about you. About our kiss.”

His mouth went dry, and he tried to steady his voice. “Yeah?”

“Yeah.” Her voice broke, and the bed shook with her quiet sobs.

He scooted toward her and wrapped her up in his arms. Taylor needed to grieve for her friend, the brave young woman Rachel had been and the one she never got the chance to be. Nothing wounded the soul like a fresh life cut too short. She cried, and he let her.

After a while the tears dried. The silence of night stretched over the room.

He could make out the soft rise and fall of her chest. “Can you reach my overnight bag at the foot of the bed?”

She leaned over and looked. “I think so.”

“Right on top is a stuffed animal. It’s for you.”

She grabbed the white bear and sat up next to him. “When did you get this?”

The wonder in her voice made him smile. Out of all the things he could give her, she was thrilled with a little bear. “I bought it at the hospital before we left. When I thought I was leaving.”

“Oh.” Her voice fell in disappointment.

“But I want you to have it now. For Rachel.”

She held the bear out and lifted it even with her face. “Then I’ll name her Racer15. That was Rachel’s online name.” She hugged the toy with a gasp as if to stay a new flow of tears. “I taught her how to play LAION and Rift. She was pretty good, too.” She turned her head toward him. “You know, lots of the kids in the ward play your games.”

A chill rose over his body. “I didn’t know that.”

“They occupy the empty hours but it’s more than that. They make us feel like we can fight and win. And when we don’t, there’s always another life waiting to be played.”

The holiness of the moment crashed over him like a tidal wave. He’d never realized he’d helped anyone. It was all fun and games, or so he’d thought, and it suddenly brought the true value of his company into focus. And it made the urgency to find someone to preserve it more acute.

“Gavin, how did you find out?” Her quiet voice broke through his thoughts.

He didn’t have to see her face to know what she was asking. “I went to the dermatologist for a mole that was growing on my left shoulder blade. He told me not to worry. That it was a normal mole.” He fluffed up his pillows and leaned back against the headboard. “Six months later it had grown so big I insisted he remove it, regardless. Three hours after leaving the office, he called me back in. It was malignant, Stage IV Melanoma.”

Taylor angled toward him. “Were you scared?”

He shook his head. “Not at first. I thought skin cancer was on the skin. And they’d gotten that, right? But when the doctor scheduled me for an MRI, a PET scan and got me an appointment with an oncologist, I realized it was something much more serious.

“In the first scan, they found a small spot on my liver and several lymph nodes. I had surgeries to remove those and began Interferon treatment.” He snorted derisively. “That was bullshit. Interferon was never designed for melanoma, but because it has no unique treatment path, the doctors treat it like other types of cancer. But the chance that Interferon will work on a melanoma patient is less than twenty percent. When I asked the doctor how I’d know if the cancer was gone, he said, ‘if it doesn’t ever come back.’”

Taylor sucked in a long breath.

He could feel her gaze on him and took her hand, the warmth radiating up his arm into his chest. “After a year, I completed the Interferon and waited. I had PET scans and MRIs done quarterly. Six months ago they found more, and I started a clinical trial, because I sure as shit wasn’t going through the torture of Interferon again with no better odds.” He dropped her hand and rubbed his face. “The trial failed, although it slowed down the spread. Now, I wait.”

“Did the doctors give you…a timeline?”

“Pinning them down for a definitive answer is like trying to catch a fish with your bare hand. My oncologist, Dr. Monroe, gives his best guess. They do what they can.” Not that he particularly wanted to know the exact date and time. It numbed him to think about it. “Six months to two years. But they don’t know.”

Her voice was soft and full of emotion. “I’m sorry. I hate it. Cancer is the ugliest thing in this world.”

He couldn’t disagree with that. “How about you?”

“I collapsed while I was on a date with Matt and was rushed to the hospital. I thought, at first, I’d overexerted myself at cheerleading practice.”

He grinned at the thought of her in a short little skirt with pompoms in her hands.

“But when they took my blood, they found my white counts were really high. They ran more tests and diagnosed me with Acute Myeloid Leukemia. A week later I had my spleen removed and, at the demand of my mother, started four weeks hormone therapy where they harvested six of my eggs. Then I got the first of forty-four weeks of chemo cocktail split into three phases. The funny thing is—AML is rare in people under forty and much more common in men than women. So I guess my blood cells think I’m old man.”

An old man? I don’t think so. A small laugh spilt from him as he allowed his gaze to wander down the outline of her body against the darkness. Her skin glowed in the moonlight and his breath caught in his throat with the desire to nuzzle his nose at her neck.

She propped her chin up with her fist, her elbow resting on her knee. “I lost my hair and all my friends, including Matt. High school kids are like herds grazing in the flatlands. When a predator comes, they run, but once the danger’s gone, they go back to living their lives like nothing’s happened. Even if the lion is eating their best friend a few yards away.”

She picked at a thread on the blanket. “But by the end of the treatment I was in remission.”

The very scenario she’d described was the whole fucking reason he didn’t have friends, and to think of her in the hospital, scared and abandoned, made him want to break something. No one knew better than him how cruel kids could be. He took a deep breath. “How long were you in remission?”

“Five and a half months. When they found the cancer again, I immediately started a new twenty-two weeks of chemo, and the doctors began searching for a bone marrow match.”

His chest tightened. Through the dark he focused on her face for any inkling she knew he was a transplant match. She didn’t appear to. Was he a selfish bastard like her friends? He sure felt like one, but he kept his mouth closed.

“After they’d done a boatload of tests and my chemo was completed, they sent me home. That was three weeks ago. Right now, if you drew my blood, I’d have no cancer cells, but in three to six months, I will. The timelines are wonky for sure. The doctors can’t give answers; they can only guess. But they’re pretty sure without a transplant I won’t make it to my nineteenth birthday.”

They sat in silence.

He wanted to comfort her, take away the pain.

Taylor laid her hands on her legs with a clap. “Well, aren’t we a bundle of good cheer? I bet I can sleep peacefully now.”

Her sarcasm caused a grin to spread over his face, and the heaviness of the moment lifted a little. The lines of right and wrong blurred in his mind. If he could give her a little comfort, then he needed to. He scooted over and raised the covers. “Here, get in.”

Even in the dark, he could see her jaw fall open and eyes round. “Really? You don’t think it’s….”

He raised his eyebrows with unspoken concern. “Probably.”

She slipped in next to him and warmed the chill he hadn’t known he suffered. Peace washed over him as he wrapped his arms around her. She snuggled close, and they both fell asleep.