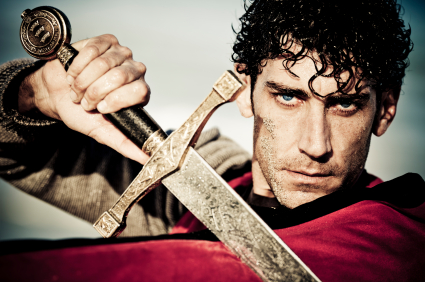 I have a special treat for you all today! One of my all-time favorite KISA (Knight in Shining Armor) is here for an interview. **Sigh** Thank goodness it’s just him and not his author or, god forbid, his betrothed. Now he can focus only on me! and you.

Leave a comment at the end of the post for a chance to win one of the books in Jenna Jaxon’s backlist!

(Sir Geoffrey enters.  He is a big man, about 6 ft 4” tall, with dark brown hair and sapphire blue eyes.  There is a tightness about his mouth, as if he is impatient with these proceedings, but there is also a glint of amusement in his eyes.  He wears atight-fitting  parti-colored cotehardie and chauses, blue and burgundy)

My heart is fluttering around the website somewhere. Wow!  Ummm…Who are you? Give your full name and title/race. Do you have special abilities?

*he bows* I am Sir Geoffrey Longford, a courtier in the service of His Majesty King Edward III.  I am currently waiting to sail to Spain with the king’s daughter, Princess Joanna, as second in command of the voyage.

As a knight I have worked hard to hone my skills with the weapons of my trade—the sword and the lance.  *he smiles*  I have won tournaments both in England and in France. And I have seen real battle in the service of the king.

I bet you are handy with your sword, my lord. **blushes furiously** What were your conflicts and obstacles in your story?

*He sighs* They were many.  I was betrothed to a woman I had never met, who was in love with my best friend.  Each time I tried to woo her for myself, some barrier to our happiness was thrust before us.  At one point I despaired of ever winning her regard, and resolved to end the betrothal.

What did you think of Lady Alyse de Courcy when you first met?

I hesitate to admit it, but she bewitched me from the moment we met.  Her beauty, her wit, her spirit all combined to make me believe myself the most fortunate of men.

I love how you talk about her. It makes me sigh! So tell me about you–What is your greatest strength? Greatest weakness? How have they influenced you and your relationships to date?

I deem my skills at strategy my greatest strength.  It has served me well both on and off the battlefield.  My resourcefulness also has stood me in good stead, especially where Lady Alyse is concerned.

My greatest weakness, sadly, is my jealous nature where my betrothed is concerned.  Until I met her, I could have denied any such emotion resided in my body.  But those wretched flames have consumed me from almost the moment we met.  And through it, I have hurt others grievously.

For those who love with passion, jealousy can be a burden. In your story, what moment was the most memorable, the most meaningful to you? Why?

*laughs softly*  That would be telling, Mistress Kary.  Lady Jenna would fain allow me to reveal the most memorable moment.  I can impart, however, that one memorable point was when I first stole a kiss from my lady. *His eyes deepen to darkest blue* She possesses a small beauty mark, just there. *he brushes a fingertip over a spot above the right corner of Kary’s mouth*  ‘Twas too tempting to resist that morning.

My deepest regards to you, Mistress Kary, for inviting me to share some of our story with you.  *he raises her hand to his lips* ‘Twill be my pleasure to meet with you again, gentle lady, should the need arise.  *with another courtly bow and a wicked grin, he turns on his heel and disappears through the door*

You are welcome anytime, Sir! Anytime. Day or night!!! (I probably shouldn’t yell that too loudly. My husband night hear me.) 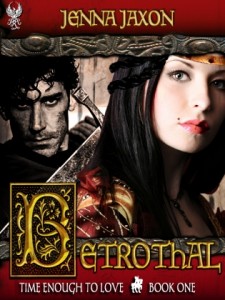 Lady Alyse de Courcy has fallen in love with Lord Braeton, a nobleman in King Edward III’s court and a man to whom she has barely spoken. Fate, however, has decreed her betrothal to his best friend, Sir Geoffrey Longford—a handsome and imposing knight, yet hardly the man she wants to wed.

When Sir Geoffrey is bound in betrothal by his father, he could not have expected the beautiful stranger to win his heart the moment they meet. Nevertheless, the fascinating Lady Alyse has done exactly that, and his feelings for her only grow as he learns more of her gentle yet spirited nature. But Alyse’s infatuation with his friend casts doubt on whether she can ever return his regard and their wedding day is fast approaching…

Will he have time enough to win her love?

“What do you require of me, Majesty?” Her mouth so dry she could taste sand, Alyse fought to speak in a normal tone. With a sigh of relief, she dropped into a deep curtsy, hiding her face in the folds of her skirt. If only she could remain bowed thus before His Majesty for the remainder of the evening.

King Edward laughed. “Obedience, Lady Alyse, as I require of all my subjects. As your father requires of his daughter.”

Her heart thumped wildly in her breast. That could mean but one thing.

She did so on unsteady feet. “I am ready, as always, Your Majesty, to obey my father as I would you.”

King Edward lifted an eyebrow toward Alyse. “A very pretty answer, my lady. And are you ready to accept your father’s decree for your betrothal? His messenger has today reached me with the contract, as I am to stand in his stead in this matter.”

Alyse took a deep breath and hoped her voice did not tremble. “Yea, Majesty, I will obey my father.”

King Edward nodded and leaned over to whisper something to Queen Phillipa, who sat beside him, heavy with their twelfth child.

Mere seconds before she learned her fate. She could scarce affect an indifferent pose before the court when inside every inch of her quivered with anticipation of the name. His name, pray God, on the king’s lips.

In her mind, she heard the word.

The king straightened, glanced at her then at the man by her side.

“What say you then, Sir Geoffrey? Does the lady not speak fair? I vow she will make you a proper wife and a dutiful one as well.”

Alyse turned, until that moment unaware that Geoffrey Longford stood beside her. Chills coursed down her body as the king’s words echoed in her mind. The sensation of falling backward assailed her, as though she rushed away from the tall man at her side even as his figure loomed larger and larger in her sight.

Her numbed brain repeated the phrase, trying to comprehend that instead he would be her husband. Geoffrey Longford.

God have mercy on me, for by the look of him, this man will not.

Fearful, she cringed as her gaze climbed higher, over his chest, over his chin, finally resting on the dark blue eyes turned toward her.

Geoffrey returned her appraisal, his gaze sweeping her figure as a smile crept over his face. “Your Majesty.” He spoke to the king but his attention remained fixed on Alyse. “When my father told me of the betrothal contract before I left his home, I resolved to play the dutiful son. Now, however, I find I do not wish to act that role after all.” His eyes held hers as he paused.

Dear God, does he mean to renounce me here before the entire court?

Alyse stared at the man beside her, willing herself to remain upright, despite the waves of ice and fire alternating through her body.

“Now I find I would rather play the ardent lover.”

An amused murmur ran through the Hall at his words. Sir Geoffrey grinned, his eyes sparkling with humor and something more. Despite the uneven light, Alyse saw an unfathomable promise in their dark depths. She took a shaky breath and looked away.

Jenna Jaxon is a multi-published author of historical and contemporary romance.  Her historical romance, Only Scandal Will Do, the first in a series of five interconnecting novels, was released in July 2012. Her contemporary works include Hog Wild, Almost Perfect, and 7 Days of Seduction.  She is a PAN member of Romance Writers of America as well as a member of Chesapeake Romance Writers. Her medieval romance, Time Enough to Love, is being published this summer as a series of three novellas.  The first book, Betrothal, released on April 19th.

Jenna has been reading and writing historical romance since she was a teenager.  A romantic herself, she has always loved a dark side to the genre, a twist, suspense, a surprise.  She tries to incorporate all of these elements into her own stories. She lives in Virginia with her family and a small menagerie of pets.  When not reading or writing, she indulges her passion for the theatre, working with local theatres as a director.  She often feels she is directing her characters on their own private stage.

She has equated her writing to an addiction to chocolate because once she starts she just can’t stop.