Today we have a great new Western Romance from debut author Karen Lopp! Congratulations on yesterday’s release, Karen and welcome to the blog. 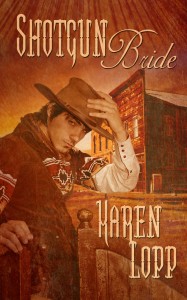 Orphaned young, Kathleen Barns has struggled to survive only to end up in a New York mill, when an unexpected inheritance gives her a glimpse of freedom. But becoming the landowner of a coveted piece of land with precious water rights in New Mexico Territory threatens to destroy her only chance at love. Forced into a marriage to a man who believes she planned the shotgun wedding to gain control of his ranch, Kathleen flees into the wilderness. Yet it is her unwanted husband that keeps saving her life and threatens to steal her heart.

Mike Baca had finally reached his goal, his fighting days were far behind him now that the war was over, he owned a ranch and he was on his way home to marry the richest girl in the New Mexico Territory. A shotgun in his back had him married to a green-eyed girl who wanted his ranch! Furious with her trickery, Mike made sure she wouldn’t want to keep him. It was only after she had run, with her big-eyed gaze haunting him that he discovered she was innocent, and there was a plot on her life. Now he must race the clock and the wild badlands to try and save his wife – and convince her to stay.

Steeped in a rich family history, Karen Lopp has always been drawn to the courageous lives of the women who lived through the hardships of the past and triumphed.

A transplant from Oklahoma where she grew up on a farm just one mile away from where her great-grandparents settled in the land run, Karen now lives in the enchanted land of New Mexico and has a running competition with her dad on who can grow the tallest hollyhocks. Books and tales of ancestors were staples in her life and she fell in love with history. Enthralled with the short stories her grandmother wrote and passed down, she took the plunge (with encouragement from hubby and kids) into the world of writing. And is now hooked. Her inspiration comes from research into her family tree and their interesting lives.

Heart pounding in her ears, Kathleen bit her lower lip and strained to sort out what noise woke her. She lay perfectly still as an unnatural silence descended. The hairs on the back of her neck stood at attention.

She softly slipped out of bed, tiptoed to the door, and pressed her ear against the rough wood. Nothing. Placing a hand over her heart, she drew in several deep breaths to slow its rapid pace. She braced a hand on the dresser, poured some water, and splashed the tepid liquid over her hot flesh.

Suddenly gunshots split the peaceful night. Kathleen dropped to the floor and huddled next to the washstand. Her heart slammed against her bones. Wood splintered under the impact of bullets and angry shouts erupted as a brawl intensified.

Somehow in the midst of the boisterous clamor, she heard a soft click and her door swung open then closed in a rapid burst. A ray of moonlight from her window glinted off the barrel of a gun. A dark-garbed man crossed the room in two quiet strides.

Swallowing the scream in her throat, her eyes widened in fear. Six bullets riddled the bed she had so recently vacated, the loud boom mingling with the new eruption of shots in the hall. A tremor ran down her spine, and she held her breath, petrified the killer would notice her white cotton nightgown against the green paisley wallpaper.