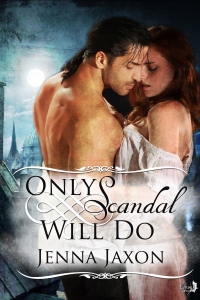 Ladies (and gentlemen), I have a rare treat for you today. I have as my guest Duncan Ferrers, The Marquess of Dalbury from Only Scandal Will Do.

Jenna and Duncan are giving away a FANTASTIC SWAG pack – so leave a comment at the end of the post!

Imagine an attractive man with golden-brown hair and a sturdy build dressed in tan trousers and a beautiful brocade waist coat. He has brown eyes that sparkle with mischief and a smile that could charm anyone with a vagina(Yes – I said it. Get over it.) And you will have a vision of Duncan.

Good Day, My Lord. Can you tell us who you are? Give your full name and title along with how you obtained the title. And since I know nothing about titles what does yours mean and entitle you to?

Good morning, Ms. Rader.  How do you do?  I am Duncan Ferrers, the Marquess of Dalbury.  I came into the title upon the unfortunate and early death of my father.  I also hold the titles of Earl of Queningford, and Viscount Hayden.  They speak of the nobility of my family throughout history, each title having been acquired through service to a king of England.  The peerage entitles me to a seat in the House of Lords.

That sounds like a pretty big deal to me — The House of Lords…WOW! So sorry for the loss of your father.

Can you tell me –what is your greatest strength? Greatest weakness? How have they influenced your life and relationships to date?

You may not believe me, but my greatest strength is my honor.  Honor bound me to defend my sister’s reputation, it made me return to my responsibilities in England, it made me seek out the woman I had wronged in order to remedy the situation.

My greatest weakness, in the past, has been arrogance.  I was born with a title and, as an only son, was very much spoiled.  I became used to getting my own way about most things and came to believe that I was entitled to have my way.  *clears throat* That, however, is no longer true.  Perhaps my weakness now is my love for my family, for it makes me more cautious in my life than I was hitherto.

I love that you are so self-aware–it is an admirable quality, as is your love for your family.

Let me ask you this–if you were not a member of the privileged class, what would you do to earn a living? Clearly you have unrivaled skill with the sword. Do you think you might incorporate that?

*Soft laugh* No, my dear.  I have often thought that if I were a more simple man, I would have captained my own ship, perhaps as a privateer. *Winks* I’d see plenty of action with a sword then.  But I’ve always loved the sea and sailing.  There’s no better sight than a sunrise over the bow of a ship.

Speaking of skill with your “sword” — Lord Dalbury, I’ve heard a vicious rumor. Unfortunately, the rumor came from a very reliable source so I must ask. This rumor confirmed that you have **clears throat and squirms in seat** bedded over 1000 women. Is that true? Can you provide accurate numbers?

*Gives her a stern look* I fear I know who you’ve been listening to.  I must speak with…the lady and ask her to keep her speculations to herself.  You realize of course that a gentleman should not boast of his amorous conquests nor indeed keep a tally of them.  However, *he relaxes back and grins* I will admit that the number you suggest is likely not a gross exaggeration.  I did keep mistresses for several years and being entertained by them on a regular basis lessens the number significantly.  Perhaps your…source did not take that into consideration.  *Stares at Kary through lowered eyelids* If I have to make an answer to this rather impertinent a question, I might hazard a guess at around 700.

Whew! I think in my day and age the only ones who could keep that pace are professional basketball players. And after having such extensive experience, what is it about Lady Katarina that won your heart?

*He laughs* That one is much easier to answer. Her courage, her loving but stubborn nature, her refusal to give in to my demands.  I’ve not often been refused anything, Ms. Rader.  She refused me everything and made me become a better man for it.  How could a man not fall in love with such a woman?

In your story, what moment was the most memorable, the most meaningful to you? Why?

Another easy question.  It was the first time Katarina called me by my name and not my title.  It denoted  *laughs* a sea change in our relationship, that I had been working very hard to bring about. *His eyes take on a far off look* I will remember that moment until the day I die.

*Smiles seductively* Only that I am so very glad to finally meet you in person, Ms. Rader.  I’ve gathered that you have followed my journey in Only Scandal Will Do quite closely.  And that I may have you to thank, in some ways, for my success in wooing Katarina.  Perhaps I could escort you back to your office and thank you properly for your help? *Raises an eyebrow then laughs* I believe that Katarina is waiting there for us.  And I may I say, Ms. Rader, you blush charmingly.  Thank you so much for the interview today.  It has been quite entertaining.

**Fans face** Thank you for your time and candor, Lord Dalbury. I’m certain you will find a happy home in the hearts of many ladies through your story. And on a personal note: I want to say, that in my first impression of you I may have judged you harshly, but in this meeting, I have found you kind and charming…and pretty damn hot.

Only Scandal Will Do

He has the woman of his dreams, but what price will he have to pay to win her heart?

Kidnapped and sold at auction in a London brothel, Lady Katarina Fitzwilliam squelches an undeniable attraction to the masked stranger who purchased her, pits her wits against him, and escapes him and the scandal that would ruin her life.

Unable to resist temptation in a London brothel, Duncan Ferrers, Marquess of Dalbury, purchases a fiery beauty. She claims she’s a lady, but how can she be? No lady of his acquaintance in polite society is anything like her. Then he discovers she is who she says, and that this latest romp has compromised her reputation. He knows how that is. One more scandal and he’ll be cast out of London society, but he needs a wife who’ll provide an heir to carry on his illustrious family’s name. He seeks out Katarina, intending only to scotch the scandal, but instead finds his heart ensnared. He’s betting their future he’ll capture her heart, but does he have what it

takes to win the wager?

WARNING: A blade-wielding heroine who crosses swords with a master of sensuality.

Excerpt for Only Scandal Will Do:

“I assure you, there was never a night like that before.” Lord Dalbury spoke quietly, and Katarina sensed a tension in him. “I had never done such a thing before. Never participated in such an auction. Never tried to take a woman unwillingly to my bed.” He stopped speaking. Just stopped. Then his breath hissed as though he’d slowly released it.

“I cannot find the words to tell you how deeply I regret I was not a better man that night.” He paused, and she held still and waited. “What I tried to do was madness, without thought, without honor. I do not even have an excuse other than my base desires, and that your abundant charms overwhelmed me.” His face was shadowy in the scarce light of the sickle moon, but he sounded contrite. “I have no right to ask for your forgiveness. I have no right to expect it. But I would ask you to allow me to attempt to remedy the situation.”

Kat shook her head slowly. “What on earth do you believe you could do, Lord Dalbury, that could even come close to a remedy for the terror and humiliation you put me through? Do you think now that I have met you, heard your feeble attempts at an apology, and rejected them, the memory of that night will magically disappear?” She fought to control her anger, though she yearned to blast him with it. “What magic potion would you have me take that would erase the memory of you pinning me to the bed? Because if you have such an elixir, then yes, I will gladly take it from you and obliterate you absolutely and irrevocably.”

He stood silent at her words, then said simply, “I have only myself to offer, my lady.”

“You would have me kill you, my lord? In that, too, I agree I would oblige you, but not at the cost of my own life. I understand the English law punishes those who do murder quite severely.” Kat was astonished when he lurched backward, as from a blow.

“No, my lady, I would not have you kill me,” he said, sounding grimly amused. “Though indeed that would probably give you most satisfaction. I meant I would have you marry me.”

His words surprised a laugh out of her. “Marry you?” The laughter grew. “I see, my lord, you think me both a whore and a fool.”

“I think you are neither, Lady Katarina.”

“Then you are the fool to believe I would put such a man as you in control of every aspect of my life.” That he thought she would even entertain the suggestion was insulting.

The pale moonlight shadowed his face, but she could read displeasure there just the same. “You judge me solely on one act that, I assure you, was grossly out of character for me. You cannot possibly know what kind of husband I would be.”

“And never will, Lord Dalbury. I can swear to you that I would not marry you if I were in Hell and you were my only hope of Heaven.”

He inclined his head toward her, a faint smile touching his lips. “I believe you made a similar claim about dancing with me, Lady Katarina. Yet we have indeed enjoyed a dance together despite your words.” His tone was soft, the sensuous, cajoling one he had used to seduce her that night in the House of Pleasure.

Kat trembled, recalling the incredible sensations of his hands, his mouth on her body. Damn. He could not do this to her again. Not just with his voice.

“Is there nothing that would entice you to leave your Hell for my Heaven?”

She struggled to answer, opened her lips to deny it, only to find her mouth completely sealed by his.

You can find Jenna Jaxon and all her characters at the following:

Don’t forget Jenna and Duncan are giving away a FANTASTIC SWAG pack – so leave a comment!